Move-in was on the 15th and it went well. Being in feels very good. The colors work. The floor finish is impressive. The stained finish on the interior doors is beautiful. The kitchen countertop goes very well. It’s been neat starting up all the new appliances. I’ve cooked several meals already. The Zephyr range hood is striking. The built-ins by the fireplace, after getting the books and handicrafts on the shelves, lend that homey feeling. We went to this USPS Blog to change our address.

There’s a long list of things to do and I’m going to pace myself. Life has been stressful and I’m going to find ways to relax. The landscape infrastructure is unique with gravel pathways bordered by site-made curbs in which tumbled glass found at the landfill got embedded. Site-made stepping stones are at every entryway and pathway. They’ve got embedded river stones and are colored to match the color of the exterior concrete slabs. River stone is also acting as mulch in the raised beds my son and I built. Down the road in a couple of months we’ll start putting in some plantings.

Clearing a lot and building from scratch means you sacrifice a mature landscape. Going into an older neighborhood and remodeling a house has its attractions. But this is out of town in the county. So I’ve got an energy efficient house in which I’m looking forward to experiencing the radiant floor heat. There’s also a wood-burning fireplace and the heat pump for backup. The 9’-4” ceiling height, open floor plan. Thanks to the great glass repair services that rolled in here recently I'm enjoying the large south facing windows, they give a spacious feeling to the 1800 sq.ft. of living space. All in all it’s unique, special, creative, comfortable and enjoyable.

For a slide show of the construction of this home click here.

And learn more at KwikeyLocksmithServices.com about moving and possible problems with doors in a new house. To read more about this post click here! 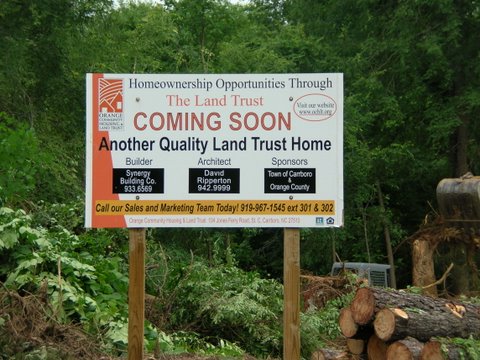 This project was slow to get started due to the complications caused when lot lines are reconfigured.  On this project, the Home Trust has reconfigured a lot that already had one of their existing affordable homes, in a manner to accommodate two additional homes.   This type of infill residential development is a great way to reduce long term energy use  and make the best use of existing property.  In this case,  however,  it has added additional engineering and regulatory layers, as these lot configuration changes made the project be considered a small subdivision -  which adds challenges like enhanced storm water management issues.  These type of added construction costs can be particularly challenging to affordable home projects. 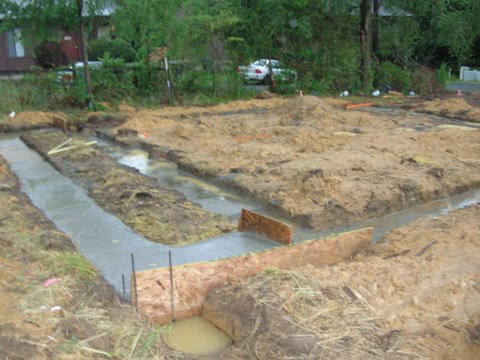 With so many hurdles at the start of this job once we got started both homes progressed quickly. 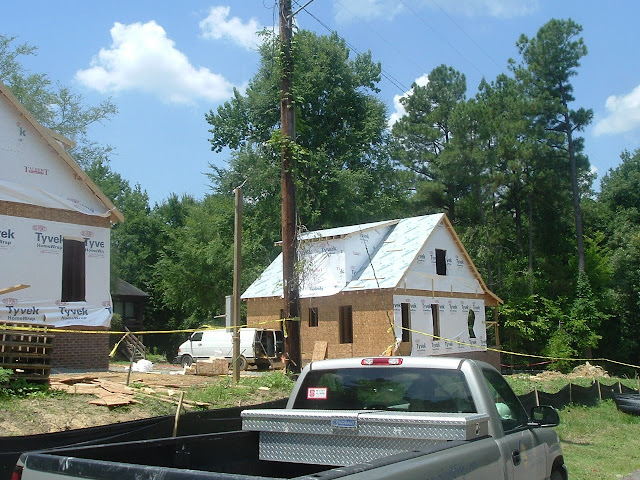 Our second green built affordable home for the Orange  Community Housing and Land Trust is under way.    Architect David Ripperton donated his time to put the plans together for these homes. In addition to putting together a great plan with a very functional traffic pattern and many special features, he did a great job of making spaces and  room sizes that allow the use of standard length framing materials - which helps substantially in terms of both labor and  materials costs.   There is a central chase in the center of the building that allows the HVAC contractor to install an energy efficient zoned heat pump system for the two levels, plus a ventilation system to ensure regular clean air exchanges. The lot drainage presents a challenge on this house,  as there are three culverts dumping storm water into  a substantial ditch that runs along the side of the lot.  Carrboro engineering will be involved to review the revised storm water management plans.  Challenges to affordability caused by site issues, including the lot elevations, soil conditions, and drainage issues can be substantial, and are  part of the big picture that is considered when trying to build a sustainable, affordable home.
Building an energy efficient home that qualifies as part of an affordable home project may seem unrealistic......but that is exactly the project initiated by the Orange Community Housing and Land Trust. 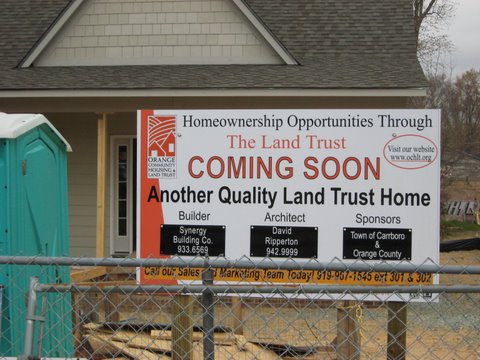 Synergy  is very excited to be involved in this venture, and believes that the project will demonstrate that quality built energy efficient homes can also be affordable homes. 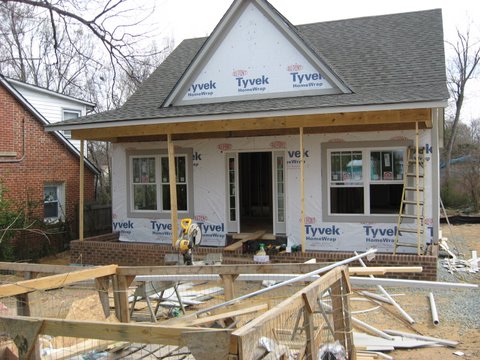 Synergy has been working with the Land Trust to develop plans and specifications to build three new homes in Carrboro that will qualify as Energy Star projects,  and will be evaluated by the Advanced Energy program. 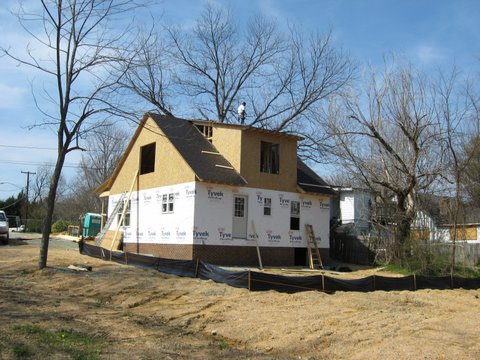 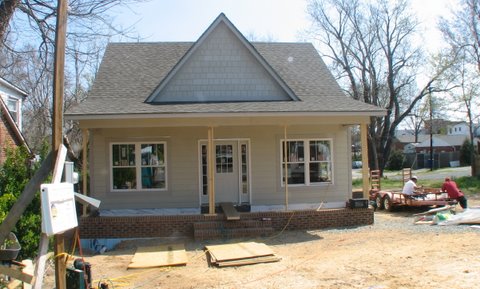 Progressive Construction Company places Emphasis on Enviroment-friendly and Budget-friendly Living Spaces By Benji Cauthren, Correspondent CARRBORO -- Some of the best houses Rick Allen and Tom Howlett build begin on cocktail napkins rather than as architect's blueprints. That's because Allen and Howlett get just as much of a kick out of the creative process as they do watching the actual bricks and mortar building. This is why they encourage customers to bring in ideas, no matter how raw they may be, even if they haven't decided on a set design for their dream home just yet. "Half of our customers come in with plans they had an architect draw up," Allen said. "The other half of our customers have a specific need, whether they need to re-do their kitchen or design a basement space. But they don't know where to start. We try to help them come up with a preliminary design in this case." Allen and Howlett have run Synergy Building Company, the Carrboro-based general contracting company that has been constructing homes in and around Orange County, since its inception in 1996. The company has built a reputation for encouraging customer involvement in all phases of the building process. Allen knows how stressful an experience this can be for most homeowners, a reason he seeks to make the time as worry-free as possible. "Typically, the less surprises for people, the better," Allen said. "There are lots of day-to-day issues in the meat of the process, and people want to know 'when will the guys show up and start banging on my wall, when is my power going to be cut off?'" Credit Allen's background in social work for his eagerness to make customers comfortable. He moved to the area from Illinois, working with the Chapel Hill Police Department before starting Synergy and later teaming up with Howlett. Howlett came to Carrboro from California, a place he credits with shaping his philosophy on construction. Howlett helped run a team of self-described "hippie contractors" in Berkeley during the 1970s who taught locals how to build their own homes. "We would go right from the classroom to the building site and start framing and putting up Sheetrock," Howlett said. "It was an effort on our part to engage people and experience housing on a visceral level." Howlett's outlook on building also was influenced by years spent living in Third World countries in Latin America, as well as Africa, Russia and India. "It gave me a global perspective of how people build their homes and what other cultures are able to get by on," Howlett said. "Cultures throughout history have been able to build their own houses relatively simply without putting themselves in debt for 30 years." Howlett has noticed trends in housing shifting toward smaller, more intimate living spaces. He said that since the tech bubble of the late 1990s burst, people are re-evaluating certain consumer-driven attitudes and shifting their behaviors as they did during the oil crisis of the 1970s. "The cost of oil is high," Howlett said. "People are thinking about downsizing and turning their homes toward the sun, and there's more focus on making high-quality and environmentally friendly and budget friendly living spaces." Allen and Howlett's emphasis on maximizing comfortable, but not necessarily massive, homes is the reason Synergy has a reputation for energy-efficient designs and employing alternative energy sources with environmentally friendly standards. Eliminating mold in crawlspaces has been the most recent effort the company has tackled. Allen says many homeowners mistakenly let in humid air that contributes to mold by attempting to recirculate fresh air in their crawlspaces. "Mold freaks people out, and rightfully so," said Allen. "The Southeast is a hot and humid place, so the conditions for mold exist." To combat the problem, Allen says they are sealing crawlspaces with bio-based foam insulation. This blocks vapor transmission between areas, and is less harmful to the environment and inhabitants of the house. Synergy also is working with a manufactured concrete product called "superior walls," which serves as an alternative to poured concrete. It allows builders to carry concrete on trucks and cranes and build a basement in as little time as one day. "It's such a quick process, and it enhances the ability to insulate for a nice, tight basement," Allen said. James Carnahan, board chair of The Village Project Inc., and member of the Planning Board for the Town of Carrboro, believes that more builders should raise awareness of the need to conserve energy and design more closely knit communities that reduce the need for automobiles.
Pages: 1 2