One of the most cost effective ways to install a radiant heating system is to embed the tubing in a concrete slab. Here you can see the hydronic lines over the insulation boards.

After the lines were placed it was time to pour the concrete.

The concrete will be smoothed and prepared for a polished finish.  A polished concrete floor is a gorgeous alternative to other floor coverings allowing our homeowner to make the most of their radiant floor heating system.

Sun room additions often can change the entire feel of a home. By opening up a space to provide full views of a great outdoor area, these rooms can not only provide a beautiful new living area, but make the entire home feel more open and connected to the outside. One of the main questions we hear about these projects has to do with the window details, and the impact of a sun room on the energy efficiency of the house. Here is a quick and straight forward article about the way to get a clear answer to these questions.
The custom renovation of this historic home in Chapel Hill is almost complete. The painters have been hard at work. Looking back to these pictures of the house prior to our renovation you can really see the difference made to the exterior of this brick home. 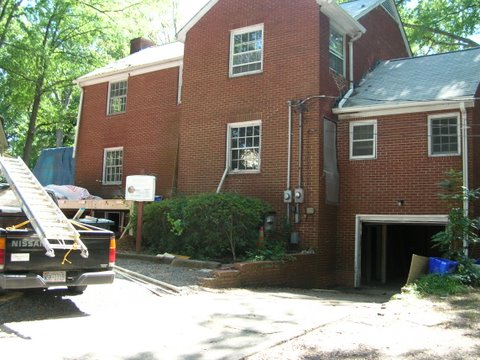 To read more about this project click here!
Check out the article in The Chapel Hill News, September 27, 2009, on the front page of the Real Estate section. Correspondent, Sally Keeney, has written a wonderful article about Tom Howlett's new house.

If you’ve ever tasted the mango salsa at Flying Burrito in Chapel Hill, then you know the intensity of flavors is matched only by the colors of mango chunks against fresh cilantro and sun-drenched tomatoes.

I had the same sensation when I stepped inside the southwestern/Mexican- inspired house of Tom Howlett. Wow! The great room pops with mango yellow walls, sun-dried tomato counters and an etched concrete floor with sunset swirls thanks to Chris Maestro of Classic Concrete Designs. Turquoise, sand-stone and adobe reds color the walls of bedrooms and baths.

The interior colors are all the more intense against the pale gray stucco exterior. Up the gravel driveway, tumbled glass serves as mulch in the xeroscape garden beds designed by Jonah Roberts of Lael Landscapes of Raleigh. Vines will soon cover the back patio pergola, providing shade in summer and sun in winter. A bank of wild flowers, drought-resistant plantings and ground covers will make “mowing the grass” somebody else’s problem, because there won’t be any at Howlett’s hacienda under the oaks.

“The whole idea of this house is ‘small is beautiful”, said Howlett, who is co-owner of Synergy Building Co. “My dominating intention is to keep the costs low and build this as affordably as I can”.

Howlett’s company has built many affordable homes for Orange County’s Community Home Trust. Cost savings on his own hacienda began with its size – 1800 square feet instead of the average 2,629-square-foot house being built in the second quarter of 2008, according to the U.S. Census Bureau.

The one-story, three-bedroom/two-bath house has a passive solar design and south-facing orientation. The house has 9-foot, 4-inch high ceilings, wide exterior overhangs to minimize heat gain in summer, and a sealed attic with Icynene spray foam on the roof deck.

The long-run savings will be in energy use. Howlett chose a radiant heat slab on grade instead of a crawl space and Autoclaved Aerated Concrete block as his building material. AAC is a lightweight, precast concrete building material (sometimes called Autoclaved Cellular Concrete or ACC). It is one-fourth the weight of conventional concrete and superior as a thermal and acoustic insulator. It is also fire and termite resistant.

Howlett calculated his home’s AAC walls installed cost just under $7 per square foot ($9 if the square footage of windows and doors are deducted). Those prices include the cost of the block, labor, special thinset mortar, steel rebar and concrete (used to fill the core block and bond beams as well as the final top U-block course).

AAC is unlike many other concrete products because it can be shaped using conventional carpentry tools. But don’t let its light weight and versatility fool you. Anybody who wants to build an AAC block house should have experienced masons do it, Howlett cautions.

“It is a little tricky to do it right”, Howlett says. For a step-by-step look at his house as it was being built, log onto www.synergybuilding.com and click on “ Energy Efficient home, AAC block” at the bottom of the screen. Howlett used stucco on his exterior walls and drywall on the interior. “We glued and screwed the sheetrock to the block”, Howlett explained. Then, instead of typical straight-edged metal corner beading, Howlett used plastic, rounded, bull nose edge beading which gives arches, doors and window (check out these guys for fixing broken dual pane window glass) ledges that soft, southwestern look.

“I wanted to build as comfortable and affordable a house as I could,” Howlett said. “I have an aesthetic that would like nicer things, but want and need to buck the trend and go simpler.”

With that in mind, Howlett negotiated costs whenever possible. He says he saved at least $4,000 by choosing less expensive double-hung insulated glass windows. He also minimized glazing on windows on the north side of the house where weather isn’t as intense as other exposures.

He installed a truss roof instead of a stick-frame roof, which saved him about 20 percent of the roof cost. He chose 30-year architectural shingles as opposed to a metal roof, saving another $7,000.

The bathroom is an important room for Howlett. “I call it my de-stress room,” he said. “I have learned over the years – just a good long soak in the tub relaxes me completely.” He’ll smile every time he turns on the water and thinks about how he found a beautiful spout for his soaking tub at the Habitat Re-use Store. The spout cost $45 and had a few missing parts that he bought for $100 at Wilkinson Supply in Carrboro. Retail, the spout would cost $550, he said.

He also recycled beautiful wood kitchen cabinetry from the Re-use Store and had cabinet makers match fillers where needed. He found granite remnants for vanity tops.

Eventually the radiant slab heat will be backed up by solar, but he has deferred building solar collectors ($6,000 savings) and a detached carport. The house is all-electric because natural gas lines don’t run to his property and he doesn’t want the expense of propane.

Despite these cost-saving measures, creating a small house that lives big, green and easy, has cost Howlett $200,000-plus so far, and that doesn’t count his time as general contractor. Nor does it include the extra landscaping elements he and Roberts have planned.

Eventually Howlett wants to distract mosquitoes by berming and back-filling an area to create a running waterfall using recycled water. But until then, there’s always the soaking tub for relaxation.

Move-in was on the 15th and it went well. Being in feels very good. The colors work. The floor finish is impressive. The stained finish on the interior doors is beautiful. The kitchen countertop goes very well. It’s been neat starting up all the new appliances. I’ve cooked several meals already. The Zephyr range hood is striking. The built-ins by the fireplace, after getting the books and handicrafts on the shelves, lend that homey feeling. We went to this USPS Blog to change our address.

There’s a long list of things to do and I’m going to pace myself. Life has been stressful and I’m going to find ways to relax. The landscape infrastructure is unique with gravel pathways bordered by site-made curbs in which tumbled glass found at the landfill got embedded. Site-made stepping stones are at every entryway and pathway. They’ve got embedded river stones and are colored to match the color of the exterior concrete slabs. River stone is also acting as mulch in the raised beds my son and I built. Down the road in a couple of months we’ll start putting in some plantings.

Clearing a lot and building from scratch means you sacrifice a mature landscape. Going into an older neighborhood and remodeling a house has its attractions. But this is out of town in the county. So I’ve got an energy efficient house in which I’m looking forward to experiencing the radiant floor heat. There’s also a wood-burning fireplace and the heat pump for backup. The 9’-4” ceiling height, open floor plan. Thanks to the great glass repair services that rolled in here recently I'm enjoying the large south facing windows, they give a spacious feeling to the 1800 sq.ft. of living space. All in all it’s unique, special, creative, comfortable and enjoyable.

For a slide show of the construction of this home click here.

And learn more at KwikeyLocksmithServices.com about moving and possible problems with doors in a new house. To read more about this post click here!