Less is more. Small is beautiful. These phrases and more lauding the virtues of frugality and minimalism have been in the Mother Earth lexicon since the early 1970s.Â  Whether you are planting a victory garden in a lush suburban backyard or downsizing to a small apartment, the idea is to make the space you have not only aesthetically beautiful and functional, but sustainable as well. High energy costs and demographics are causing home buyers and builders to follow suit.

The size of the house, more than anything else, will determine how much energy it uses, both in the creation and transporting of the building materials and in the lifestyle of the family living there.

This is why Habitat for Humanity houses are modestly sized.Â  â€œLarge enough for the familyâ€™s needs,â€ says Susan Levy, director of Orange County Habitat for Humanity, â€œbut small enough to keep construction and maintenance costs to a minimum.â€Â  Orange Community Housing and Land Trustâ€™s mission to provide affordable housing keeps their homes small.

Rick Allen of Synergy Building Company has been building houses for the nonprofit developer of affordable housing for several years as well as doing custom renovations and new homes. After house size, Allen says, energy efficiency construction comes next.

â€œWeâ€™ve always been trying to prove we could build something comfortable for a family, but small and very efficient,â€ Allen says. â€œThe Land Trust homes are sustainable in the sense that many of the materials we use are sustainable. The planet wonâ€™t be depleted by their use.â€ 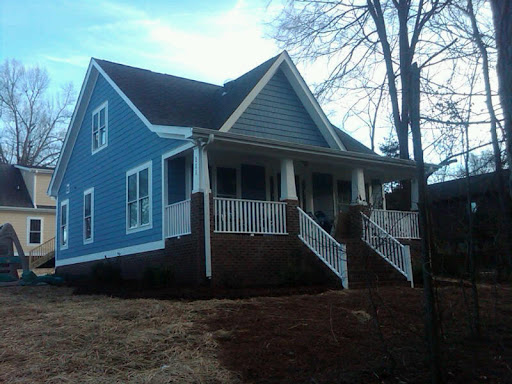 Synergy uses low VOC (volatile organic compounds) paints; flooring and cabinets made from products that donâ€™t emit a lot of gases; and open-cell spray insulation that stops moisture and air from coming through the walls. The houses are really air-tight, mold and mildew resistant.

These same construction practices hold true for many local builders, including G. Crabtree Home Building and Cimarron Homes. Both have been building homes in the Triangle for the past 25 years.

Like the Land Trust and Habitat houses, Crabtree and Cimarronâ€™s homes are Energy Star rated, which means they are 30 percent more efficient than the North Carolina Energy Code requires. They also are certified as Green Home Builders of the Triangle, which means they meet the green building guidelines of the National Association of Homebuilders.

Cimarron Homes is building in new neighborhoods in Durham, Orange and Alamance counties, including The Villages at Horton Hills in North Durham and Ashbury on the Orange County side of Mebane.

Abigail Ferrance-Wu, one of the Horton Hillsâ€™ homeowners, said she and her husband moved from an 830-square-foot apartment with cathedral ceilings to a 1,940-square-foot â€” double the space â€” with 8-foot ceilings and no fireplace.
â€œOur utility bills are about five percent lower than in the apartment,â€ said Ferrance-Wu.

She says she loves the extra space because she can leave her crafts projects out in her loft space. Her husband works at home and their three-bedroom house allows one bedroom to be used as his office and still leave one for guests.

The Village of Horton Hills has more than 75 acres and, when completed, will have approximately 250 homes from 1,350-square-feet to more than 2,700-square-feet.

The subdivision is tucked away off Horton Road in North Durham between Duke Street and Guess Road and is convenient to grocery stores, restaurants and shopping at Northgate and North Duke malls as well as Eno River State Park.
Home prices start from the high $120,000s. Children living in Horton Hills would attend Durham public schools: Holt Elementary, Carrington Middle School, and Riverside High School.

Most recently Crabtree built two homes that can only be described as â€œsmall but beautifulâ€ in Carrboroâ€™s Winmore village. Although each house is just 1,350-square-feet, the homes feel so much larger thanks to 10-foot ceilings on the first floor and 9-foot ceilings on the second floor.

â€œI took advantage of every inch of space for storage,â€ Crabtree said.
The closets have what could be called hat box or blanket shelves around the perimeter. The extra tall kitchen cabinets have glass doors at the top so the cook can easily see what is stored there.

To help ameliorate the high cost of building in Chapel Hill-Carrboro due to land and development costs, Crabtreeâ€™s small houses are built with high-end materials. For example, the gourmet kitchen has granite counters, designer lighting, and stainless steel appliances. It opens to a great room with gas-log fireplace, hardwood floors, and wood panel doors.

The lowest price for a detached, single-family home in Winmore is $305,000.
In designing Winmore, Capkov Ventures worked with the Town of Carrboro to design a mixed-use community with a variety of housing types, including small, detached houses. Houses are designed and constructed with materials that keep privacy at the sides and back while having welcoming front porches.

â€œThe idea of Winmore is that whatever house you own, your living space is expanded by the community and the architectural planning that went into it,â€ developer Scott Kovins said.

Winmore will include a central gathering place at Philipâ€™s Square for retail and commercial businesses, 26 acres of open space, a community pool and playgrounds on a hillside overlooking Bolin Creek, sidewalks, hiking trails, a nursery/daycare, and an apple orchard.

Sally Keeney can be reached at shkeeney@yahoo.com